Arriving in London the tube gave me the opportunity to study my fellow traveler’s. Exhausted from the drive from Cornwall and the rush to catch the train, although quite why we were rushing I will never know. Swept along in the madness, I felt obliged to pick up my pace just to keep up. After finding a seat on the train I tucked the bag under my legs and hugged my handbag. William’s teddy safely tucked inside. 7 stops to go. As my body gently swayed to the motion of the train I gazed around. Who are these people? Where are they going? I was sat opposite a middle-aged man, I noticed he’d not shaved in a while, he didn’t have a manicured beard but an unshaven one. He was staring out of the window, trapped in his thoughts, rubbing his eyes, I wondered what was troubling this man. As I looked at him, through the reflection in the window I pondered whether he might have lost a child like me, all of a sudden my shoulders relaxed, my body giving way to sympathy. I didn’t think it possible that 2 strangers sat in the same carriage could be on the worst journey of their lives. As I studied the man’s face I knew that my initial anxiety was completely unfounded, I didn’t need to be afraid of strangers on the tube, after all what could they possibly do that could hurt more than the pain that engulfs me everyday?

I was worried about William being in my bag, knowing that this teddy was by far the most important tangible item that would ever be in my possession. Priceless. After arriving and checking into the hotel we were ready, ready to make our nerve-wracking journey over the bridge to the Houses of Parliament. As Paul took a photo of me holding my special bear in front of Big Ben we received some strange looks, did I care? not a jot.

Going through the security at the Houses of Parliament was interesting when the Police saw the teddy in my bag. I was almost itching for them to ask why I had a teddy, I couldn’t wait for the teddy to set the scanner alive with its metal heart and precious cargo, but it didn’t. William had his very own visitors badge. Deep inside Parliament we waited with William sitting on my lap. We couldn’t visit the commons where there was a live debate, because that meant leaving William in a cubby hole at security. I politely declined knowing that I would never be separated from my precious cargo. William stayed with me. Always. We waited, Paul, William and I on a bench, several high-profile politicians afforded us several sideways glances, why is that woman sat there, dressed up smartly holding a teddy bear? 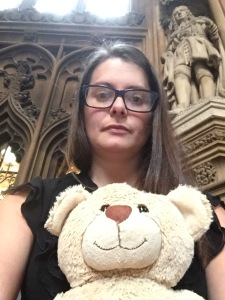 Me and my boy xx

It was time, 4pm. We filed through to the reception past security, with all the attendees, some with very small children, looking at them I felt a pang of envy, why do they have their children and I don’t have mine? Of course, I don’t wish them harm but why wasn’t mine lucky? Those parents were so lucky to have a ‘sepsis survivor’. Making my way into the room where the reception would be held, my eyes darted round the room trying to locate William, and there he was. A large easel displaying the most beautiful photo of my darling boy. I took William out of my bag and held him close to me, I stood in front of his photo drinking in his captivating smile, the sparkle in his eyes, I was overcome with emotion, the tears came. The reason we were there was overwhelming me. My amazing little boy was dead. As guests milled around I met others who have also lost children, young children like William, I was blown away by their courage, their strength to talk to a sea of unknown faces about their most tragic loss. I stood at the front watching in awe as Ron Daniels, CEO of the UK Sepsis Trust read an excerpt from my blog, holding William, my eyes never faltering from my bear. As I listened to the facts, to the alarming amount of lives claimed by sepsis every year, 37,000. 10,000 children of which 1,000 of those die. William was one of those.

It was extremely hard to stay vertical for the remainder of the event. I wanted my bed, I wanted quiet, I wanted William. I wanted William so much, not a photo, I wanted William. To hold him, to close my eyes and breathe in his sweet smell. To feel those delicate fingers on my cheek. To hold him in my arms once again. That should have been William running wildly around the room, a survivor, but he wasn’t, he was one of those figures, having lost their lives to Sepsis. It is surreal. How could he die from a complication of pneumonia? How could that pneumonia not be diagnosed? As I stood in that room, in the heart of the Houses of Parliament I have never felt so isolated. This was the first day I was to really test the mask out. I didn’t do a particularly good job. I was miserable, I cried, I couldn’t get my words out, but I was there, 400 miles from home, with William. I got my little boy to the Houses of Parliament.

1 thought on “Day 1 – Houses of Parliament with William”